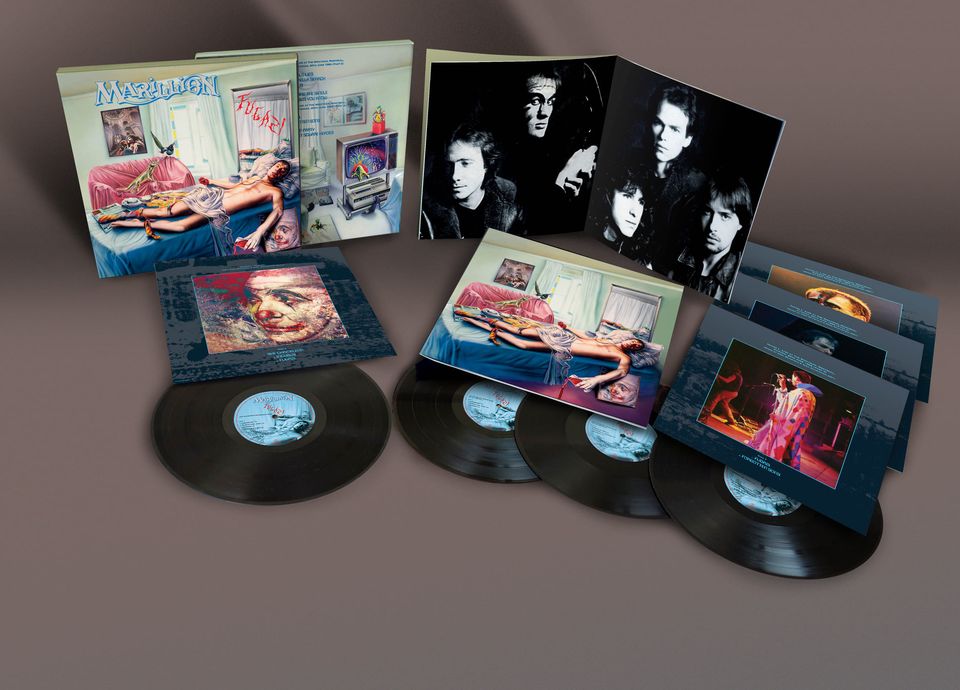 Marillion’s Fish Years deluxe editions will soon be complete. The new edition of the second album, Fugazi from 1984, will be released on September 10th.

The disc is somehow the “ugly duckling” in the band’s discography, as it was exactly between debut (Script For A Jester’s Tear / 1983) and breakthrough (Misplaced Childhood / 1985). And for the Marillion fans of the first hour, for whom only the time with Fish counts, there is only one true classic anyway: Clutching At Straws, the last work with the charismatic Scotsman on the microphone, who recently ended his long solo career.

I would also describe album #4 as the creative climax of the neo-proggers, but I also think Fugazi is great. The second album was the first I ever heard from Marillion. 1984 – long, long ago – I was fascinated by the cover of Mark Wilkinson and then the exuberant lyrics by Derek W. Dick – aka Fish. Nowadays they remind me of the dark visions of Peter Hammill. Like this text excerpt here from the title piece.

Of course, there are also good reasons not to like fugazi. You can tell from the album the great pressure the group was under at the time. The record company EMI wanted to have a successor to the debut as soon as possible, preferably with a single that could also land in the charts.

That was “Punch & Judy”, and despite the very interesting text about a relationship in which, for once, the man is downright terrorized by his partner, the song is pretty insignificant. “Jigsaw”, on the other hand, is dangerously close to kitsch, especially in the chorus. So a total of two pieces that would have been dumped if there had been CD players or streaming services in 1984.

Fugazi production was disappointing in 1984

On the record, however, you had to endure the failures and instead were annoyed about the poor production by Nick Tauber. The bass lacks any naturalness, the high tones tug at the hearing organ. In short: the record shows at all times the short period in which it was made in the studio.

That’s why I’m very curious to see whether the new edition can eliminate the technical errors of the original. Because compositionally, the disc was completely up to date with the exception of the two mentioned songs, as evidenced by the aggressive opener “Assassing” or the eight and a half minute “Incubus”, which is in no way inferior to the ingenious title song in terms of lyrical quality.

Bluray contains a live recording and a Fugazi documentary

The deluxe edition by Fugazi will be released as a 4LP or 3CD / Bluray version with lots of bonus material, including a previously unpublished live recording from June 20, 1984 in the Spectrum in Montréal/Canada. In addition to the new stereo mix and a documentary about the adventurous story of how it came about, there is also a 5.1 version at the Bluray. Here it will be interesting to hear what the sound engineers were able to get out of the old master tapes. The “Script” edition was a bit of a disappointment in terms of surround sound, whereas the other two albums from the Fish years with their new multi-channel mix were able to convince across the board.

I gradually lost interest in the other releases of the band after Fish left in 1989. “Seasons End” (1990) with the then new singer Steve Hogarth was still strong, as most of the compositions were from the Fish era. After that it was unfortunately no longer the band that I had come to know and love in the 1980s. The exception: the ingenious concept album “Brave” (1997), which was also given a great 5.1 mix in a deluxe version. Be sure to listen to it!