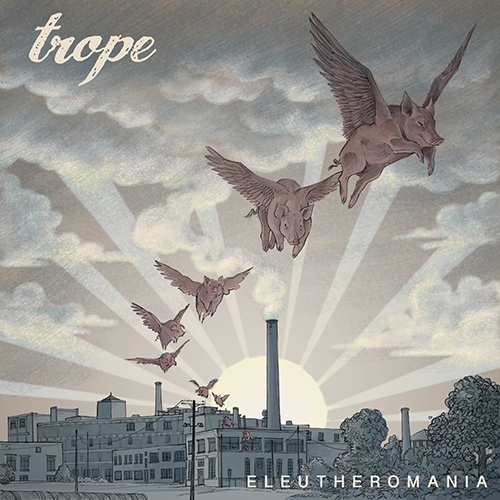 Whether you like it or not: We live in times when music is just a mouse click away and is served in small snacks on the streaming platforms – ear-friendly. Playlists are the new albums. Besides that, cover art is also losing importance. It is a comprehensible development: Why hire highly paid agencies when the elaborate work of art is trimmed to thumbnail size at Spotify and others anyway?

In that sense, Trope’s debut album is a surprising exception to the rule. One look was enough and the US band had me on their leash. The illustration shows winged pigs that, as if drawn on a chain, fly away into the sky above several large buildings. Flying pigs? There was something there once…

For every discerning music fan, the association should actually become clear. Of course: “Animals” by Pink Floyd. Then a first look at the tracklist: Song #1 is titled “Lambs” – it fits perfectly with the rough Floyd work from 1977, which is loosely based on George Orwell’s political fable “Animal Farm”.

So I clicked the play button on my Apple Music account with a certain expectation, but then the next surprise followed: the sluggish bass riff, which immediately reminded me of another prog rock institution. “These are Tool, under a different name”, it occurred to me. But instead of Maynard James Keenan’s singing I suddenly heard an incredibly powerful female voice. Of course, there are worlds between the intonation of Diana Studenberg and Maynard, but when it comes to charisma, the Montreal-born Canadian with German roots is in no way inferior to him. And to be completely honest: Studenberg easily outclasses the Tool eccentric when it comes to vocal range.

In terms of structure and arrangement, “Lambs” is based on the last three works by the prog gods. But inspiration never becomes imitation. At the end of just under five minutes, they completely emancipate themselves from the role model. Guitarist Moonhead, who also produced the debut, knocks you out. This group can rock, there is no doubt about that already on the opening track.

In addition to the powerful production, the album mix was also extremely successful. No wonder, as Trope had David Bottrill, one of the best-known of his guild, on the controllers, who already put the finishing touches to the works of Peter Gabriel and – of course – Tool. In addition, Mike Fraser (AC/DC, Metallica) and Ted Jensen (Dave Matthews Band, Pantera) joined forces with engineering and mastering, two other big names in the scene.

Anyone who has such prominent support right at the start of their career – Trope were founded in 2016 and spent the first few years writing songwriting and recording demo tapes – can consider themselves lucky. But Trope fully live up to the advance praise and hit one brilliant song after the other.

The band doesn’t go the easy way towards the charts, but instead hits a few hooks in between. Even the opener has some crooked bars if you listen carefully. “Surrogate” goes even further and delivers the finest polyrhythmics in just three and a half minutes, without drifting into infatuation à la Dream Theater. In the single “Pareidolia” every note also fits perfectly. Complexity and suitability for the charts do not have to be mutually exclusive, the five musicians from overseas prove this impressively.

But still Trope made a small concession to the music market. The Tears-For-Fears cover version “Shout” still has enough independence that it does not stand out negatively among so many brilliant songs. Here too, the guitars really make a bang.

The conclusion is “Seasons Change”, which with its melancholic lyrics and wonderful guitar melody may already open a new chapter in Trope history. After 37 minutes, from which every single one excited me, the album is over – and I inevitably click the repeat button on Apple Music.

It will be interesting to see how the young, hungry band brings their irrepressible power to the stage. Diana Studenberg has already revealed to me on Instagram that the five – in addition to her and Moonhead, Joe Cicchia (guitars), Todd Demma (bass) and Sasha Siegel (drums) – are already making plans for a European tour that will also take them to Germany.

The last time Trope have performed in our country was on August 21, 2020 in Düsseldorf as support for King’s X. Then the second Corona wave made further gigs in Germany and elsewhere impossible. But sooner or later a new support slot with a well-known group could make the sympathetic musicians from overseas really big on their next visit.

Trope definitely have the potential to do so, as their debut impressively proves. And bands with strong frontwomen are currently popular in the European Prog and Metal scene, for example Golden Caves (Netherlands), Jinjer (Ukraine), Lacuna Coil (Italy) or Arch Enemy (Sweden).

Conclusion: “Eleutheromania” is an outstanding debut and will undoubtedly occupy a top position in my top 10 list for 2021. The fact that I still don’t give the highest number of points should be a small incentive for the band. They announced that they are already working on new material and this time it should be even more complex and longer pieces. So there is even more potential – I’m excited!