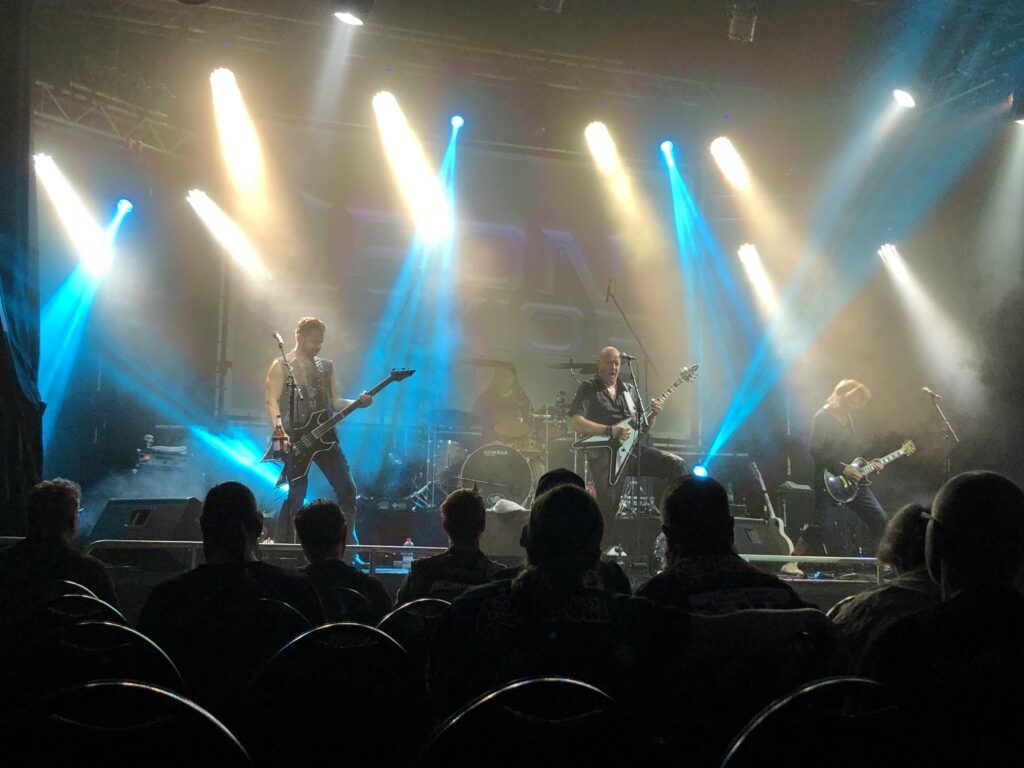 Admittedly a bit late, here comes the follow-up report from my first live concert in around a year and a half. The last time I saw bands live on stage was at the very beginning of the pandemic: On March 6, 2020, Blind Ego and the Italian Kingcrow delivered an inspiring Prog Rock evening at the Zentrum Altenberg in Oberhausen – and immediately afterwards Corona came to us with all its might and closed the doors for further concert visits for the time being.

But leave the sad past behind. On Friday, August 20, 2021, after the long hiatus, live music came finally back for me. The long-running Power Metal Iron Savior appeared as part of the “Resonanzwerk goes Rock” series in the rustic industrial hall near the Centro shopping center in Oberhausen – a great location, especially for Metal events.

The cult formation had brought two other representatives of the genre with them: the local heroes Ignition (Duisburg) and Torian from Paderborn. I hadn’t heard of either support group so far, which I found a shame in retrospect. Because the latter in particular could inspire me.

Long before the show began, some visitors had gathered in front of the Resonanzwerk. Guests even drove up from the Netherlands and were warmly welcomed by the local fans. As a Metal fan you are welcome everywhere in the “community”, no matter where you come from.

The unavoidable procedure of checking the 3Gs (vaccinated, recovered or currently being tested) also went quickly on admission. Then I picked a permanent seat – my first Metal concert with seats – and went into the hall.

Ignition and Torian are a great support

At exactly 8 p.m. the first supporting act, Ignition, stepped into the limelight. The guys from Duisburg delivered a really decent performance and heated up the crowd a lot. Singer Dennis Marschallik also had a joke or two up his sleeve – even his own impressive waist size and the lack of fitness after such a long absence from concerts were discussed between the songs. Ignition as well as their colleagues showed on stage how happy they were that this event could finally take place at all.

As a music fan, you have to take the opportunity and thank the managing director of the Resonanzwerk, Björn Bialowons, and booking agent Kersten Lamers from K.L. Concerts & Promotion in Duisburg. With “Resonanzwerk goes Rock” – despite all the adversities of today’s pandemic situation – they have brought a great series to life that will be thematically oriented towards a musical focus on each evening.

This time Power Metal was the name of the game and Torian, the second support act, definitely has it. Although I missed half of their gig because I was chatting quite long with Björn Bialowons, what I heard outside was absolutely great. And when I was back in the hall at some point, the band from Paderborn really carried me away with their melodic pieces. After 45 minutes of performance, I really wanted an encore. Conclusion: I would even go to a concert and watch Torian as the main act.

But on Friday it was of course Iron Savior, the power metal institution from Hamburg. I know all the classic older songs from the combo by founder and front man Piet Sielck. But before the concert I finally listened to their current album “Skycrest” and have to say: It’s also really good. Incidentally, the songs were played live for the first time in Oberhausen – although the record has been on the market for a year and a half! It’s just crazy times.

Hence the seated show, which wasn’t as bad as I had imagined before. There was even a real mood when Iron Savior performed their absolute classics like The Savior, Way Of The Blade or Hall Of The Heroes. Shortly before the end of their performance, THE hit of the band “Heavy Metal Never Dies” was played. Not only from the group itself, but also from the visitors who, divided into two groups by Piet Sielck, fought a veritable duel shouting the lyrics out loud. By now, at the latest, everyone had forgotten that after almost four hours of live music sitting there was already a bit of pain in the ass – pun intended.

A Judas Priest classic as encore

With “Atlantis Falling”, their traditional bouncer song, which was followed by the cover “Breaking The Law” by Judas Priest, Iron Savior left the stage in sweat, but happy after their live comeback. I also went home really happy and will definitely return to the Resonanzwerk soon – like hopefully many other music fans as well.

Metal and Rock fans can see a lot more great shows there in the coming weeks and months. This Friday, August 27th, from 8 p.m. (entry 7 p.m.), the organizers put on a Hard Rock evening: In addition to the main act Snakebite, support bands Who Killed Janis and MARKK 13 will be performing.

Tickets are still available to print out yourself at Eventim Light (price: 20 Euros plus advance booking fee) or at the box office (25 Euros). The well-known hygiene regulations with 3G naturally also apply this time.