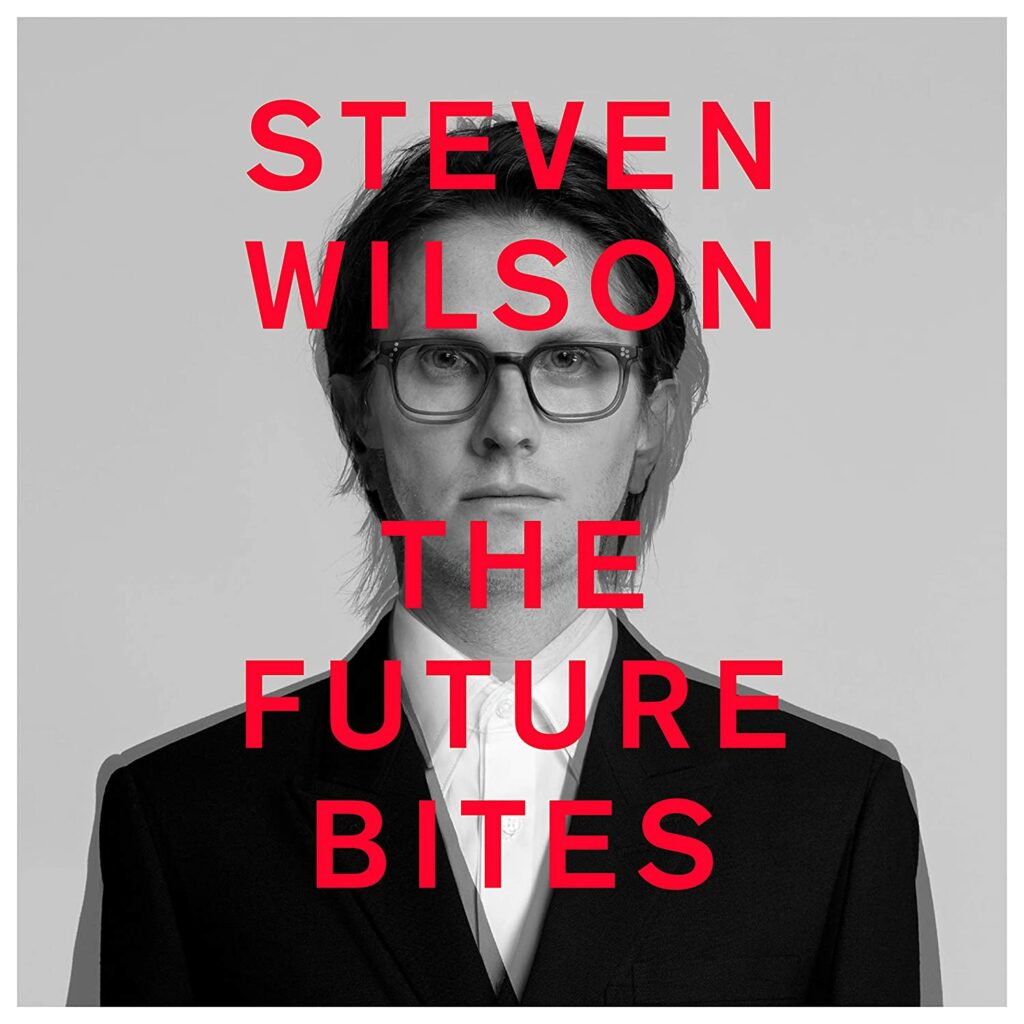 The title of this blog (Buying New Music) is based on one of my favorite tracks from my favorite band Porcupine Tree: Buying New Soul. And since Steven Wilson founded the band in the late 1980s and then was its front man and creative mind for more than two decades, he naturally has a special place in my heart as a music fan.

So I expected every release by the 53-year-old with great enthusiasm. And after he put the pioneers of modern progressive rock on indefinite hiatus I followed him unconditionally on his solo path. Even “To The Bone” (2017) with the total failure of the single “Permanating” and some other mediocre songs grew on me after some time.

Release and concert tour postponed due to Corona

On January 29th, 2021 its successor “The Future Bites” finally came out. The album should actually have been on the market for a good six months by then and Wilson should have been promoting it on an extensive world tour in large halls. But the corona pandemic also got in the way of the ambitious Briton.

Instead, he released almost half of the album in chunks on the various streaming platforms. This approach – apart from the unfortunate external circumstances – finally spoiled my anticipation.

At the beginning of 2020 reports came out that Wilson wanted an outlet for his passion for artists like Prince or even Donna Summer. There is nothing negative to say about this musicians – I also listen to them sometimes. But please: Not in a version by Prog Rocker Steven Wilson!

Unfortunately, the fears of the music press have been confirmed. And even more than half a year after its release, I still don’t like TFB.

The beginning isn’t bad at all

The disc doesn’t even start badly: With the short but dark acoustic track “Unself”, which moves seamlessly into “Self”. This song has a great groove, you can even dance to it – and in this case that’s a compliment. Add to this the intelligent lyrics and crazy sound effects – including a distorted guitar – and that song could become a real live highlight if Wilson does play concerts again at some point. There’s also an awesome music video accompanying the song (see below).

Then comes “King Ghost”, which is a bit rough at the beginning, but the melodious chorus is Wilson in its purest form. I admit that I got some goose bumps from his plaintive singing. Unfortunately the album then goes down the drain. At least, “12 Things I Forgot” has quite interesting lyrics to offer –  but measured against the high standards of the British musical genius, it is still very unspectacular.

“Eminent Sleaze” is the threatened reminiscence to Prince. But unfortunately a bad one. I feel the same way as with “Permanating” from the previous album. This piece was supposed to be a homage to ABBA. But let’s be honest: If I were their songwriter Björn Ulveaus, I’d rather turn away offended. Because it is badly composed and rightly not a chart hit – perhaps one that Wilson had secretly hoped for.

After the sluggish rhythm of “Eminent Sleaze”, I’m always so tired that I don’t even really notice the following song “Man Of The People”. But that’s no wonder: It’s also unspectacular like its predecessors and wouldn’t even stand out positively on the last, also extremely weak Blackfield album (the cooperation between Wilson and Israel’s star singer Aviv Geffen).

Anyway: Then comes my personal highlight of the album – “Personal Shopper”. Over nine minutes long and a sarcastic comment on the darker side of our consumer world – the song would even do Nine Inch Nails credit. The whole thing is loosened up by a catchy chorus with background singers and a guest appearance by Elton John (!), who in his inimitable style enumerates all possible and impossible consumer goods.

TFB advertising campaign is a flop – like the whole album

Around this central piece of the album, Steven Wilson developed an elaborate promotion concept with an advertising campaign for TFB, which should also appear during the live performances. But Corona ruined all plans and the concept will now probably end up completely in the bin. Because allegedly the Brit is already working on the next solo album and changed his tour plans.

For once in all the pop stuff, “Follower” comes across as really “(Brit)rocky” and snotty. Nice to listen to, but of course not my adored, sensitive Wilson, who is responsible for Porcupine Tree masterpieces like “Arriving Somewhere But Not Here”, “Russia On Ice” or the aforementioned “Buying New Soul”.

And then TFB already comes to an end with the next piece. “Count Of Unease” is highly praised by the fan base. But in comparison with Wilson’s other ingenious final pieces that emotionally sweep the listener away, it also falls off. Nevertheless, a halfway conciliatory conclusion to the 42 mostly disappointing minutes.

Steven Wilson is not a Pop star

My conclusion: An artist with an exaggerated desire for change has overshot his goal and also his skills. Because Steven Wilson simply can’t do good Pop music, he’s still too cerebral for that – and too uptight.

The whole album seems somehow unbalanced because he apparently wanted to please everyone – and in the end he didn’t really make anyone happy – whether the Pop, Electronic or Rock fan. The famous phrase of German songwriter Wolf Biermann “Only those who change remain true to themselves” finds no confirmation in this case.

I just hope that Wilson gets back on track and to his Prog Rock roots with the next album. Because this is the genre he masters like no other.

P.S .: The album can now be listened to on the streaming services as a deluxe version that was previously only available in physical form. It contains a lot of unreleased B-sides and remixes as well as some longer alternative versions of the TFB songs. These are mostly better than the original versions – and I wonder why they didn’t find their way onto the album.