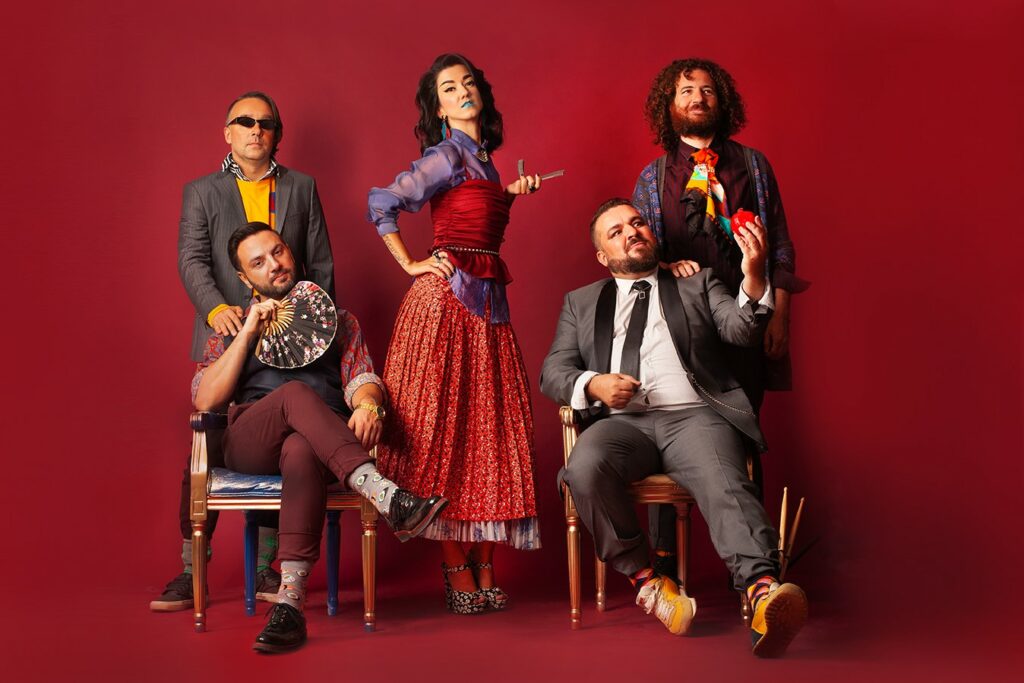 The synthesizers buzz, the guitars shimmer – and in the chorus Decho Taralezhkov sings something about the “Dragon man”. But wait – the song is actually called “Dragoman”! Whatever type of man that should be …

As you can see – the first contact with Stop The Schizo leaves the interested listener a little perplexed. Further research on the Internet even reveals the fact that Dragoman is not a person, but a small Bulgarian town. “The idea for the piece came to me in the shower”, says singer and guitarist Decho with a smile. “I just sang the term to myself there.”

Even compatriots are sometimes irritated by the strange, one could also say somewhat naive, approach of the group to their music. Decho admits: “Which Rock band would write a song about a small town in the west of their country these days?” But that in no way prevented “Dragoman” from being played thousands upon thousands of times on the local radio – especially on the stations in the capital Sofia which ultimately led to a number 1 on two of the most important Rock charts in the country. “It’s our biggest hit so far”, explains the lead singer of the group, which calls itself an Independent act. “We still have a life besides music and therefore have to organize, produce and ultimately pay for everything ourselves.”

In addition to Indie, Stop The Schizo also adds a good portion of Art Rock. “Our music should also have a certain standard”, explains Decho in an interview with Buying New Music. The common drive of the five musicians is to blend together their diverse tastes and experiences as musicians “in an attempt to make a hopefully genre-defying variety of pop-oriented high-energy Alternative Rock”, as keyboard player and singer Valia Barlev puts it.

Stop The Schizo: A strange band – in a positive sense

And then there is the – mentioned above – slight weirdness in the music and self-presentation, which also lifts the band out of the broad mass of typically depressive Indie groups and at the same time makes them so likeable.

Even in the promotional photo (see above), the five-man troupe, founded in Sofia in 2014, is taking a brightly colored course, which is reflected at concerts in Valias colored hair, eye-catching lipstick and sometimes painted face. The live shows are also characterized by elaborate multimedia presentations, which are designed and operated by the band’s VJ, Emil Granicharov.

A welcome guest at festivals in Bulgaria

The synth sounds also make the songs of Stop The Schizo somehow danceable – a component that the keyboardist and her four colleagues act out to their hearts’ content on stage. “I would like to see more people in the audience dancing to our music”, says singer Decho. He believes that this reservation is a typical phenomenon of the club scene, in which being happy and partying wildly are known to be “no-gos”.

Stop The Schizo would of course also like to test the reactions of concertgoers in other European countries to their music. However, given the pandemic, there are not yet any concrete plans for trips abroad.

In Bulgaria, the formation considers itself lucky to be able to perform regularly at concerts and festivals – such as “Rebel Rebel” in Sofia in mid-July – despite Corona. “This summer was almost back to normal for local music bands like us”, says Decho. Last September (2020), the Eastern European country was one of the first in the EU to re-allow larger events such as concerts – which also brought a bit of normality back for the five members of Stop The Schizo.

“Live Session” shows all facets of Stop The Schizo

Nevertheless, their first live document after two EPs and the “Dragoman” single was made behind closed doors. The “Live Session” was recorded in July 2020 in the Sofia Session Studio and impressively shows what the aspiring band is capable of. From the sing-along hit mentioned above to Indie hymns with a slight R.E.M. touch like “Perfectly Obscence” to the slightly melancholy view of the future for all of us in “Dance For Tomorrow”, which was even recorded with two trumpeters from a Brass section.

Valia Barlev sets the start and end point of the streaming concert recorded with six cameras, which can be seen on the band’s YouTube page. In the intro, with her Korg synth, she initially brings back memories of the most famous keyboard artist of the 1980s. Everyone in their mid-40s knows, of course, that this can only be Jean-Michel Jarre. In the outro, on the other hand, she shines with introverted piano music à la Yann Tiersen.

A perfectly choreographed concert script that shows the diversity of the group and at the same time impressively proves that Stop The Schizo – despite all the little craziness – should be taken seriously in the music scene. Because this is an ambitious and talented group, from which we will certainly hear a lot of good things – and music – in the coming months and years. Hopefully at some point we may even see them on German concert stages.

The band name “Stop The Schizo”
The word “schizo” needs clarification. The band says: “Pronounced ‘she-zoe’ [‘ʃizo’], the term refers not to a person suffering from schizophrenia, but instead to a type of behaviour, characterized by unpredictable changes in attitude. For example, a person, who for some reason or the other used to pretend they didn’t know you (even though they do know you very well), suddenly starts acting like you are and have always been their best friend. The name of the band is therefore a sincere call for mercy when too many people start to act like this.”